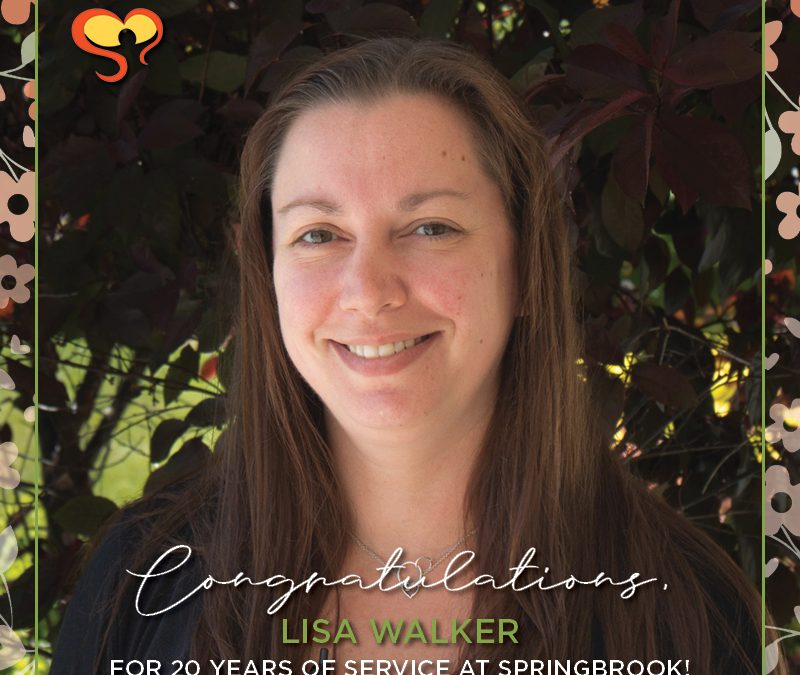 Lisa admits to having “lost count” of the years she has worked for Springbrook—but we know she has been with the organization for 20 years. When Lisa’s sister and friends spoke highly of Springbrook—and the fun they had working with the people that Springbrook supports—Lisa thought she would apply for a position as a direct support professional to work in a house on Springbrook’s Main Campus. The thought of excursions, play, and crafts with kids excited her. Initially, Lisa started at Parker House, which was later decommissioned to make way for the Family Engagement Center. She then moved into an assistant manager position at McDowell House until the day that building was decommissioned and Hilltop and Highland House were built to support more on-campus students. After one last move to Hilltop on the Springbrook campus, Lisa made a final move to a community home; she has worked as a residential manager in a community home in Milford for about two years.

After working on campus for most of her career with Springbrook, Lisa was apprehensive about moving into a residential manager position in a community home because she was worried that she would miss out on the joy she shared with the kids while working as an assistant on campus. In many ways, her former position gave her the opportunity to “act like a kid” and play and do crafts throughout the day. However, when she took on the role of residential manager, she says she had a “pretty smooth transition,” which she says “just seemed to fit.” It may be that many of the staff with whom she works also transferred from the campus and are now united under the roof of the same community home. It could also be that, as Lisa says, “The residents at Milford are awesome.” While Lisa misses being one of the kids and spending the day creating and doing crafts, she loves the calm and “mellow” atmosphere of the community home in Milford.

When Lisa first started at Springbrook, she thought it would be temporary; however, to this day, she continues to share in the joy of those around her. When asked if she had any advice to offer new employees with the organization, she said: “Be excited about coming to work.” And if an employee is feeling overwhelmed? “Stick through it, and you’ll be okay because it’s normal to feel overwhelmed at first.” Lisa is eager to see people excel in the community homes and tells everyone who comes to her for training to always reach out with questions. Outside of work, and despite the outgoing nature she brings to her job every day, Lisa is a true homebody who loves spending time with her dogs. She adopted her dogs, pit mixes, from the local SPCA. In her spare time, she crafts in her dedicated craft room, often crocheting baby blankets or booties. Other times, she can be found out of doors.

When asked what she might do if she were to retire, she said: “Travel to Ireland and visit the castles.” While we would be happy to have you send us a postcard, we are delighted to have you with us now, Lisa. Congratulations on 20 years!