The School at Springbrook – Class of 2022 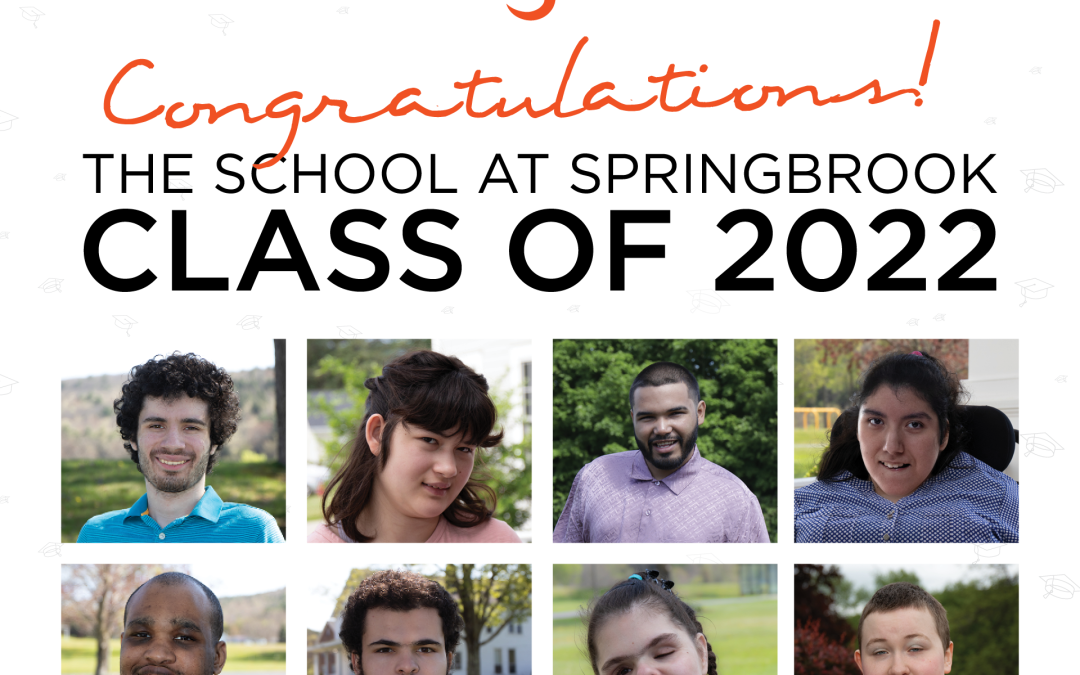 On Thursday, June 23rd, The School at Springbrook honored the Class of 2022. We are pleased to bring you a look at what made this class so special over the coming days and weeks! 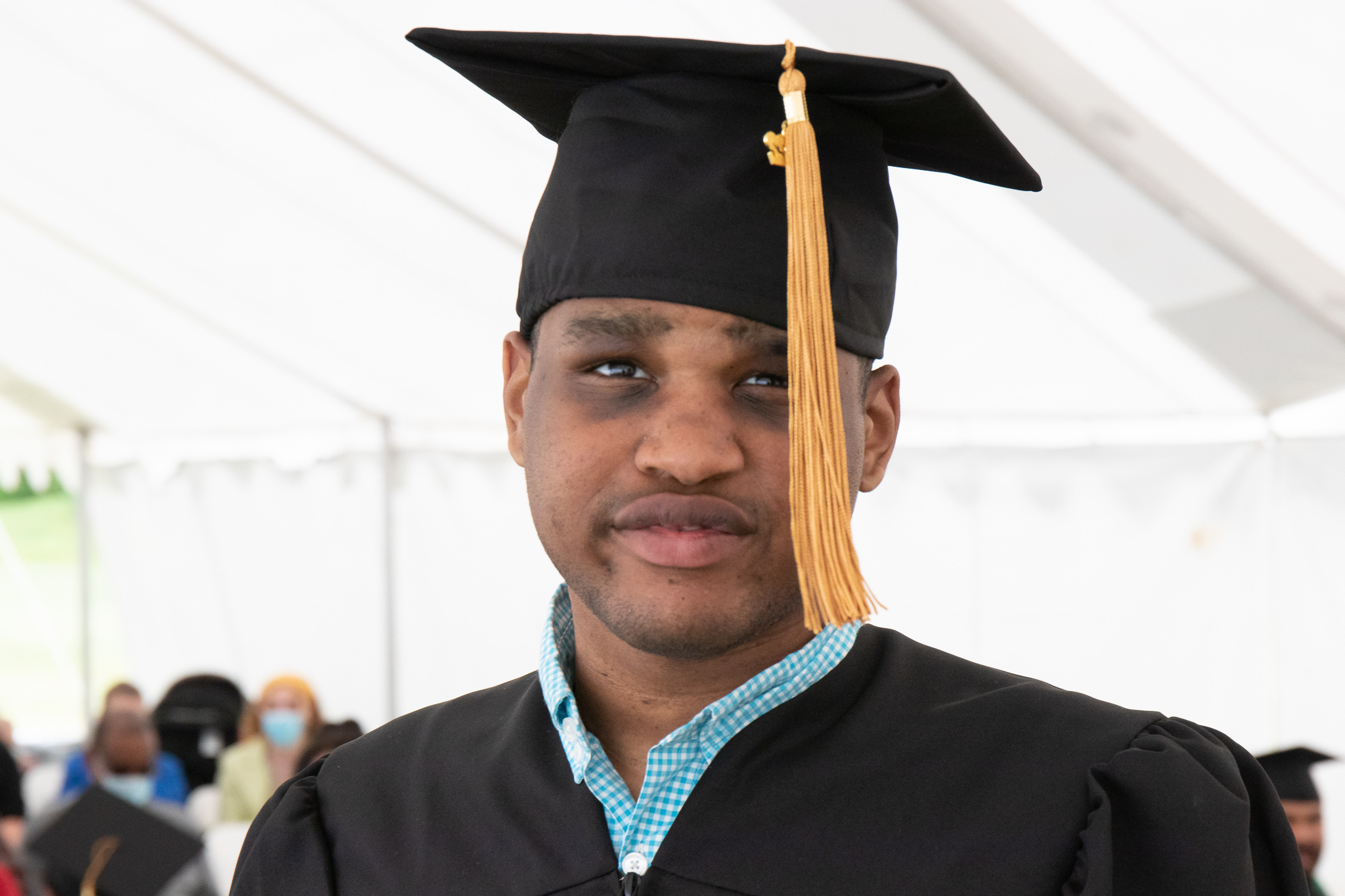 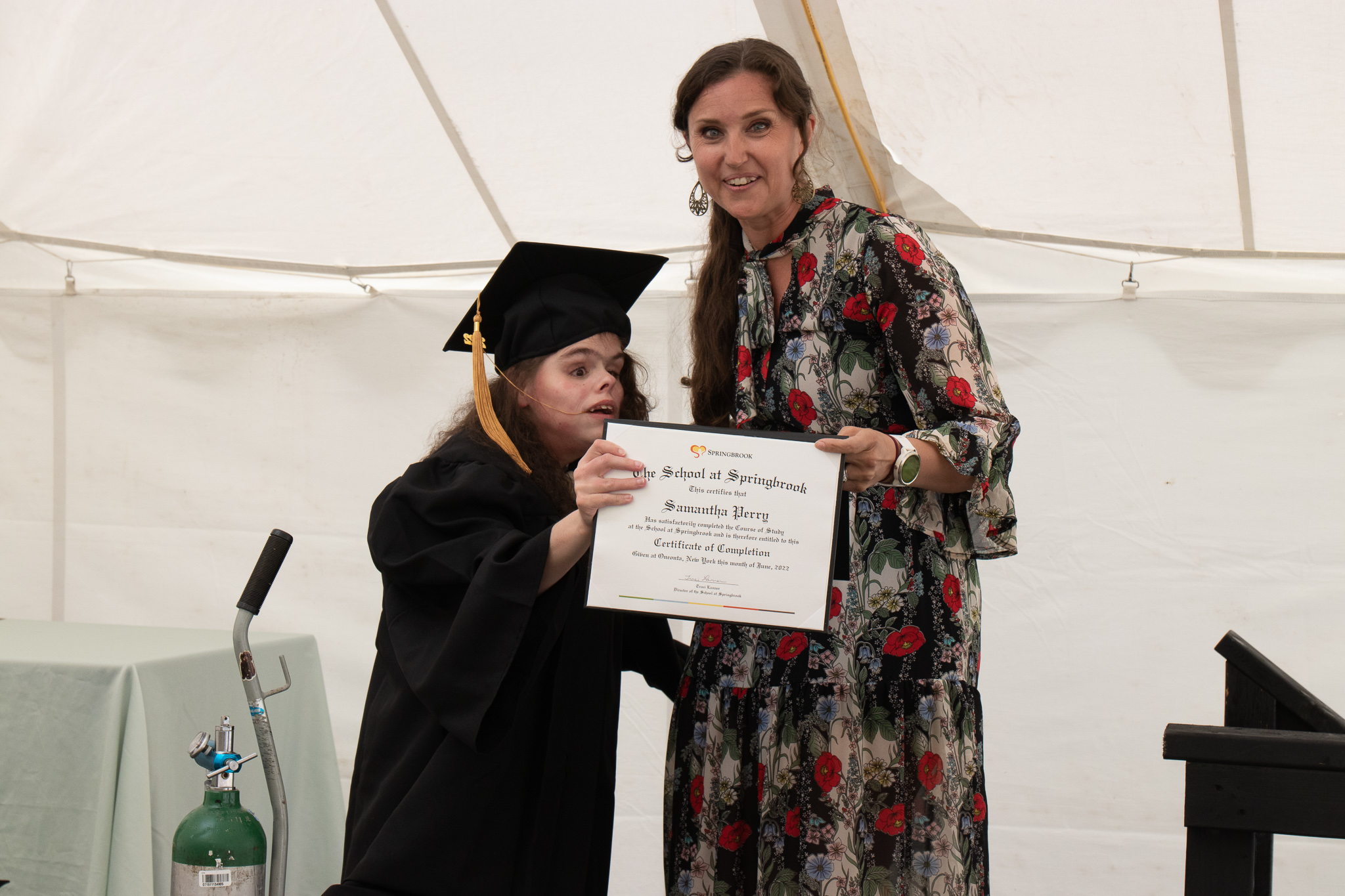 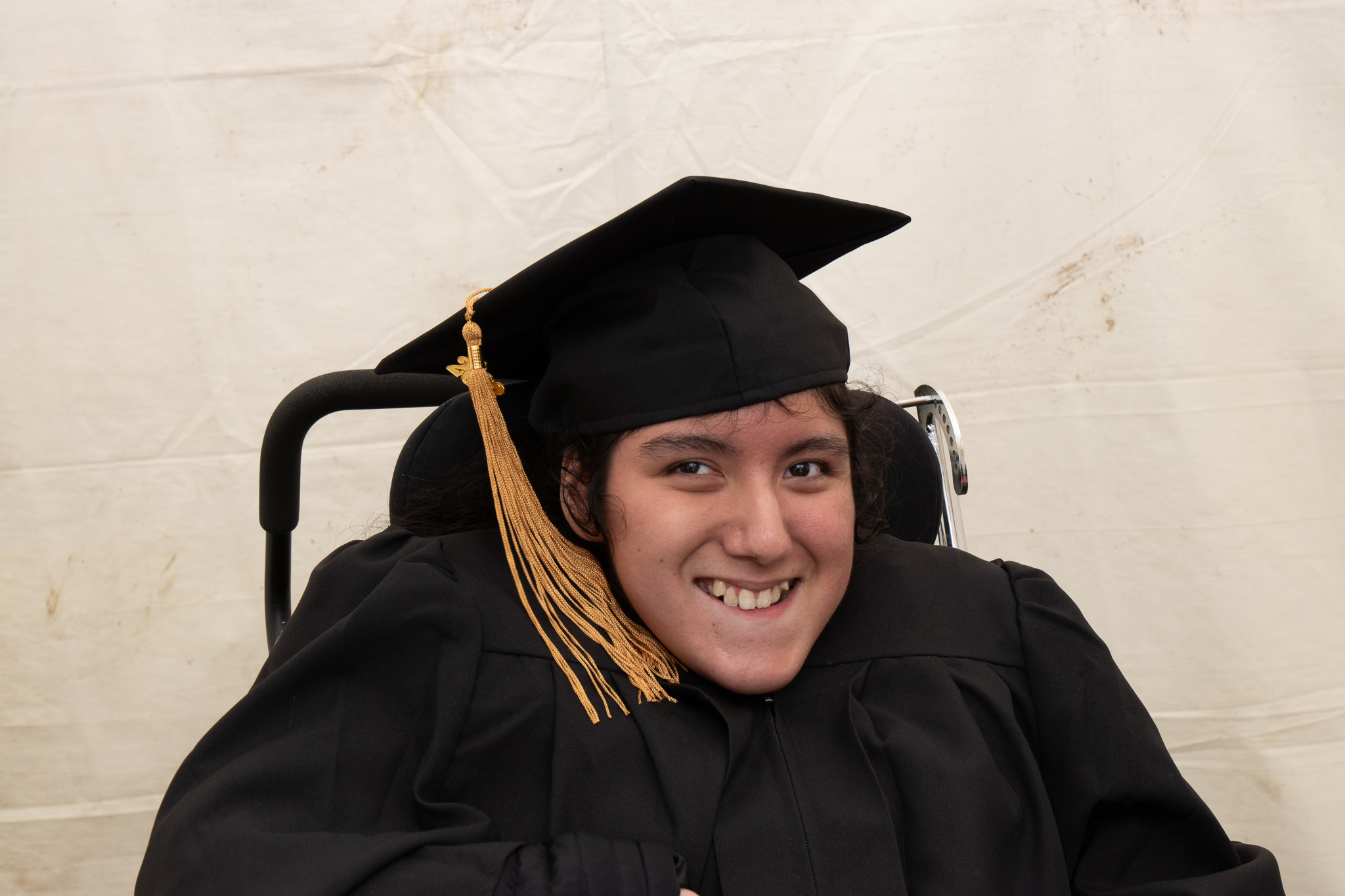 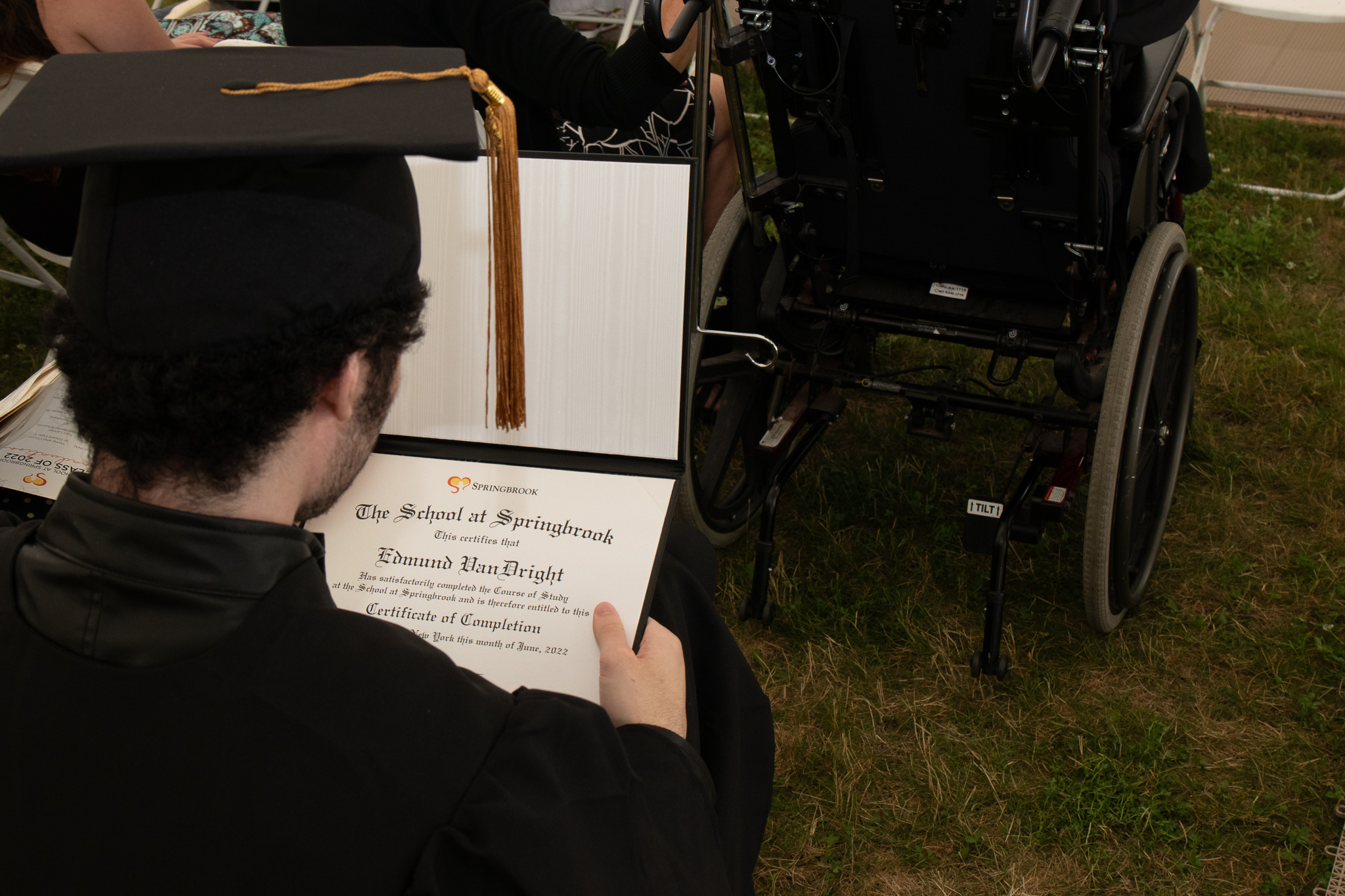 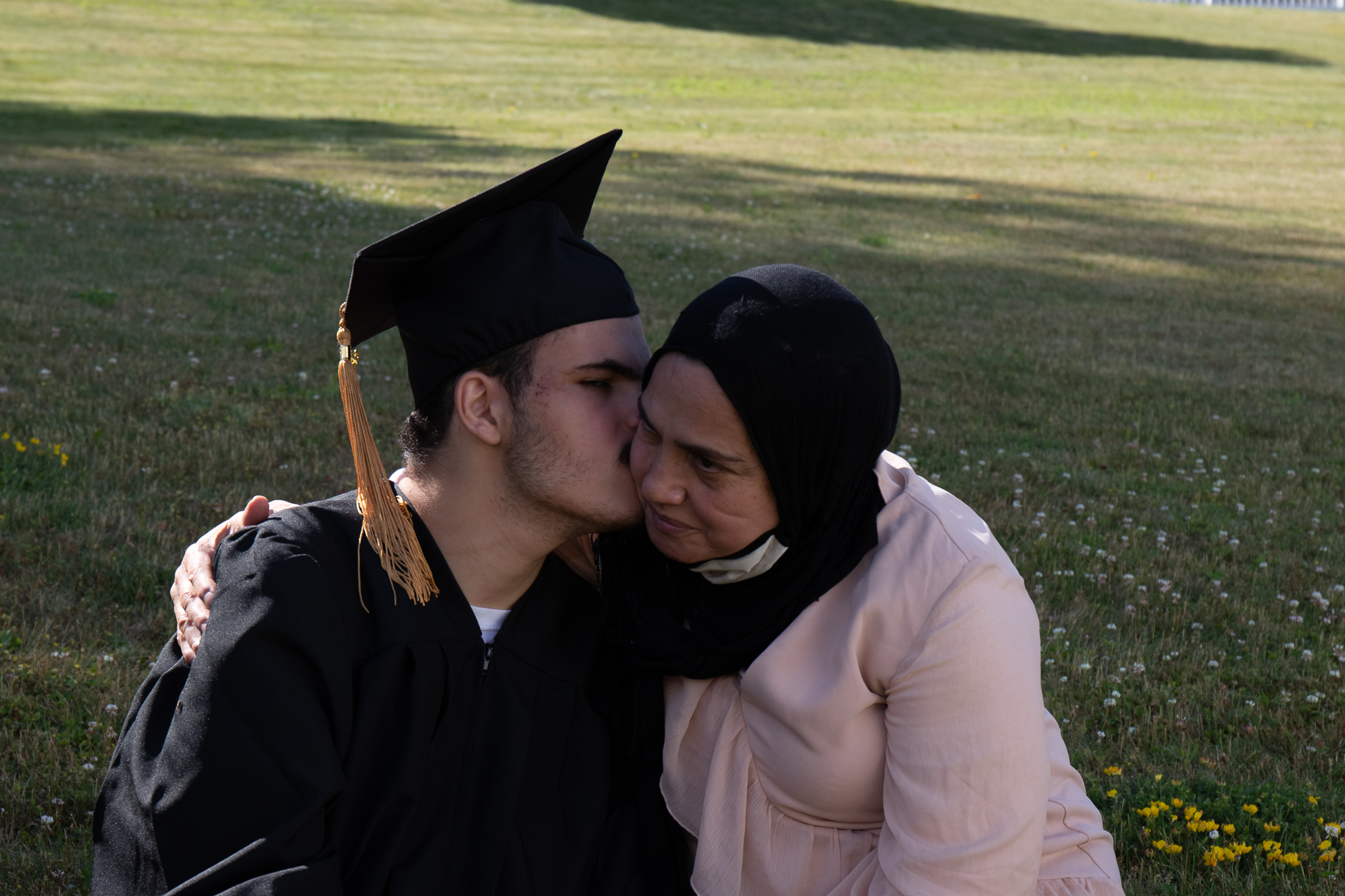 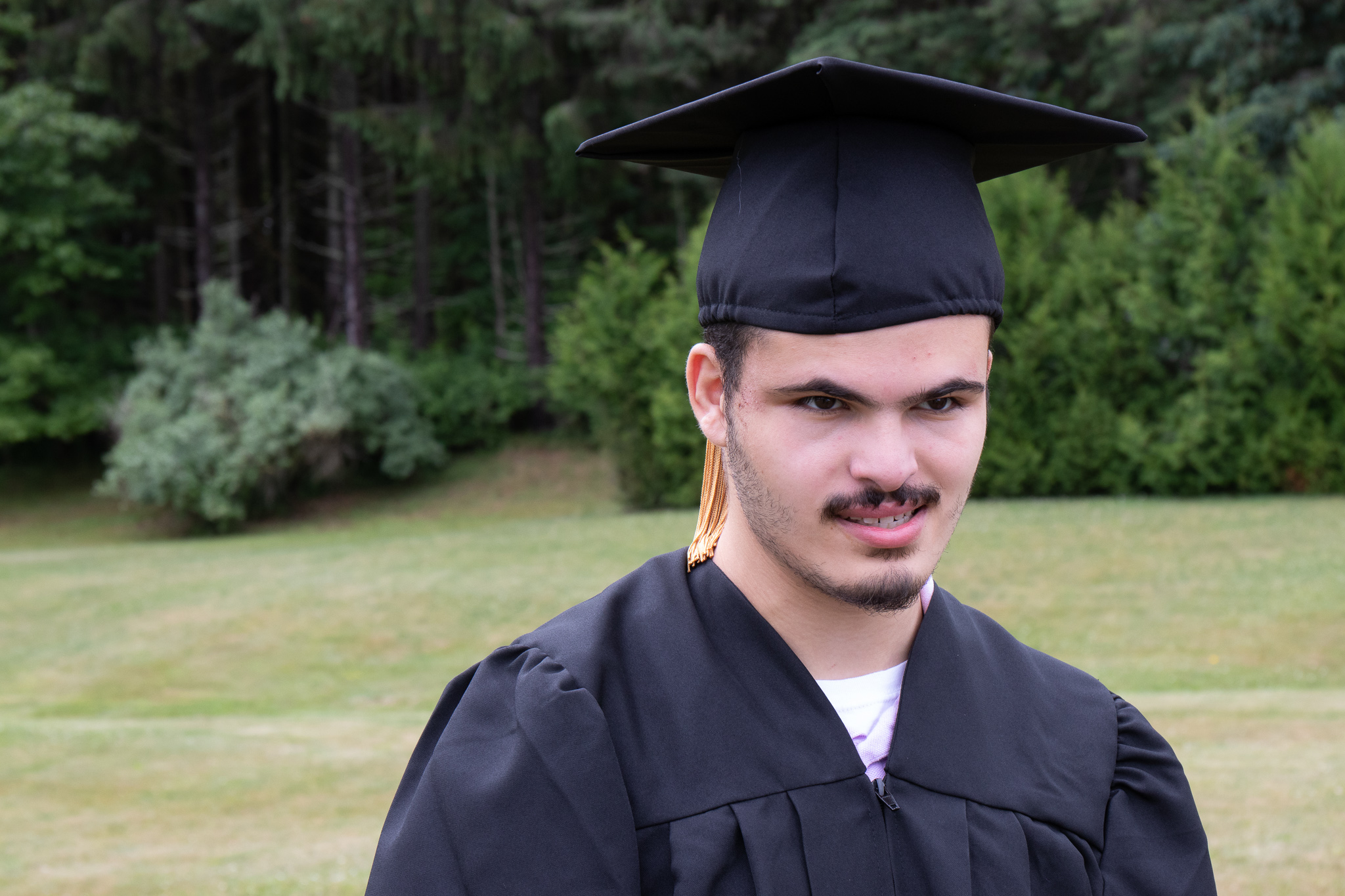 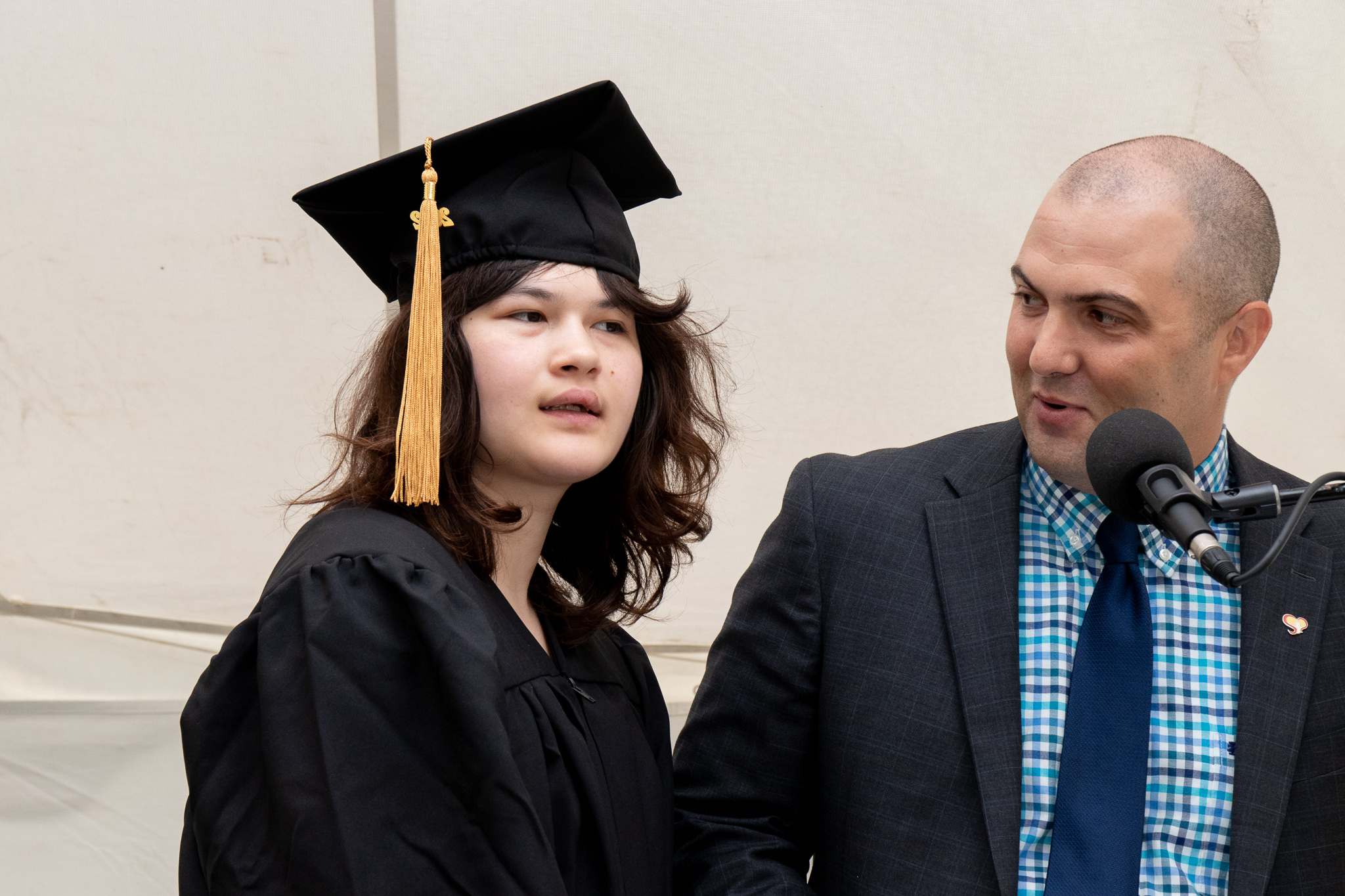 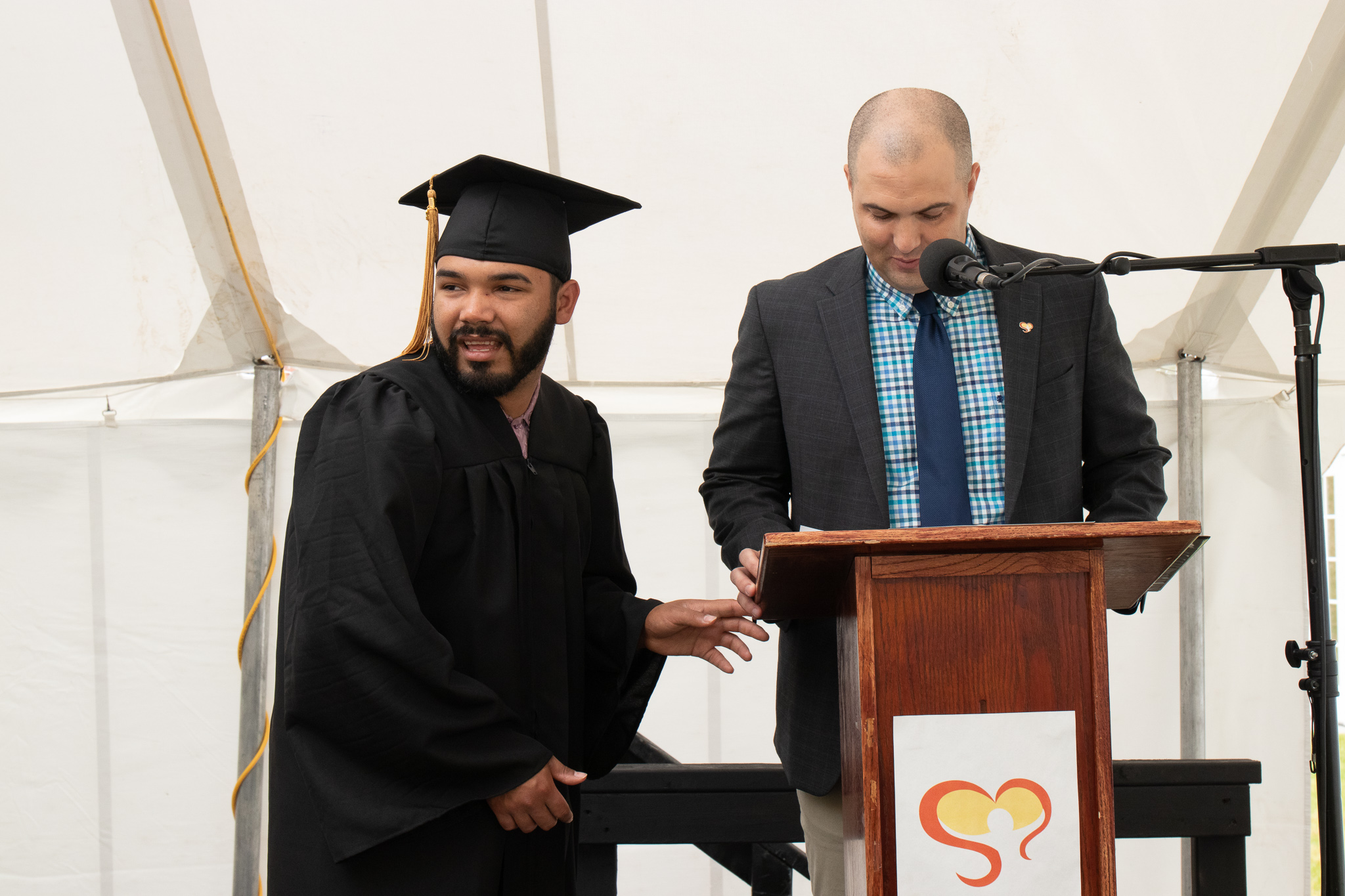 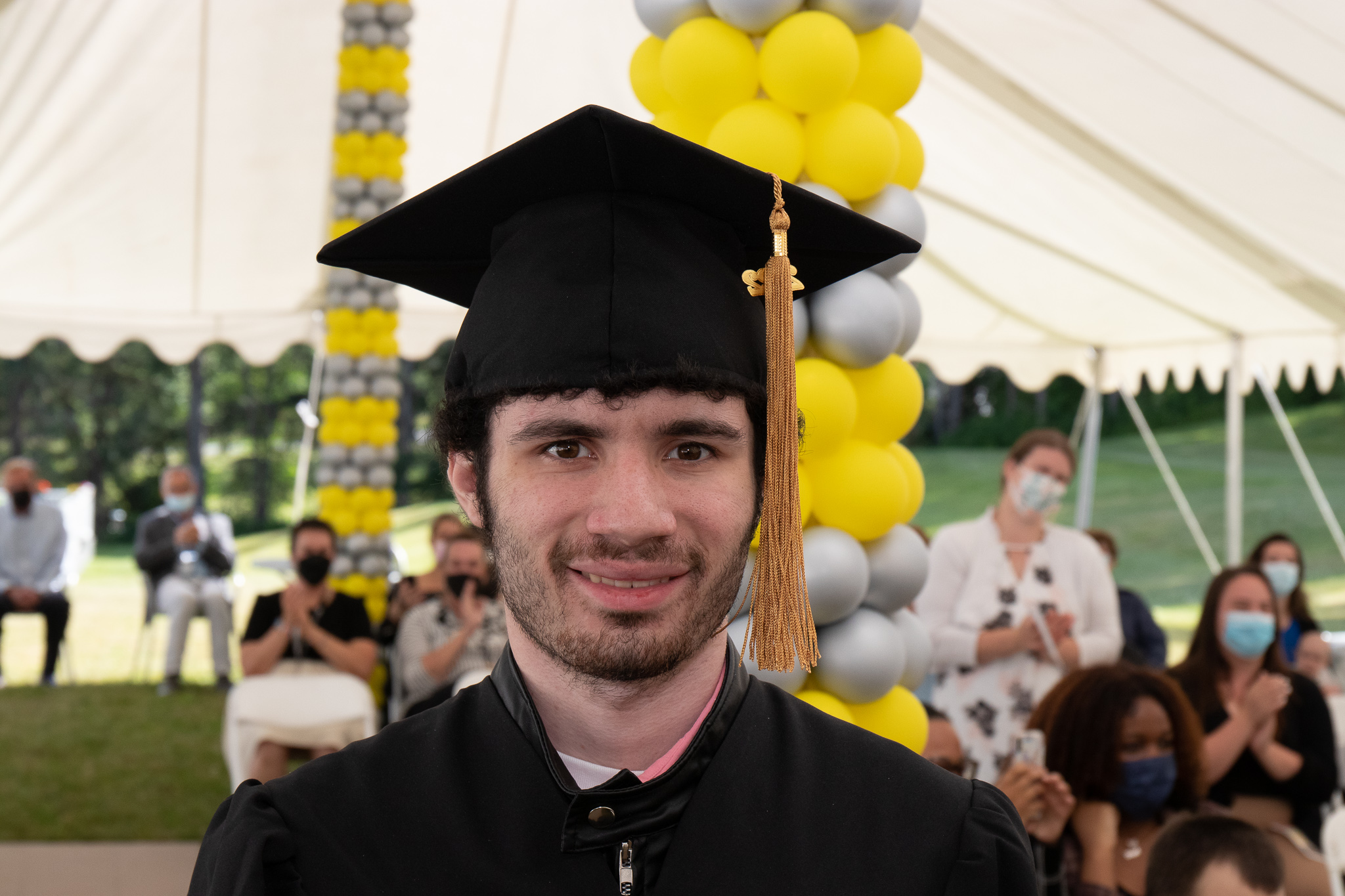 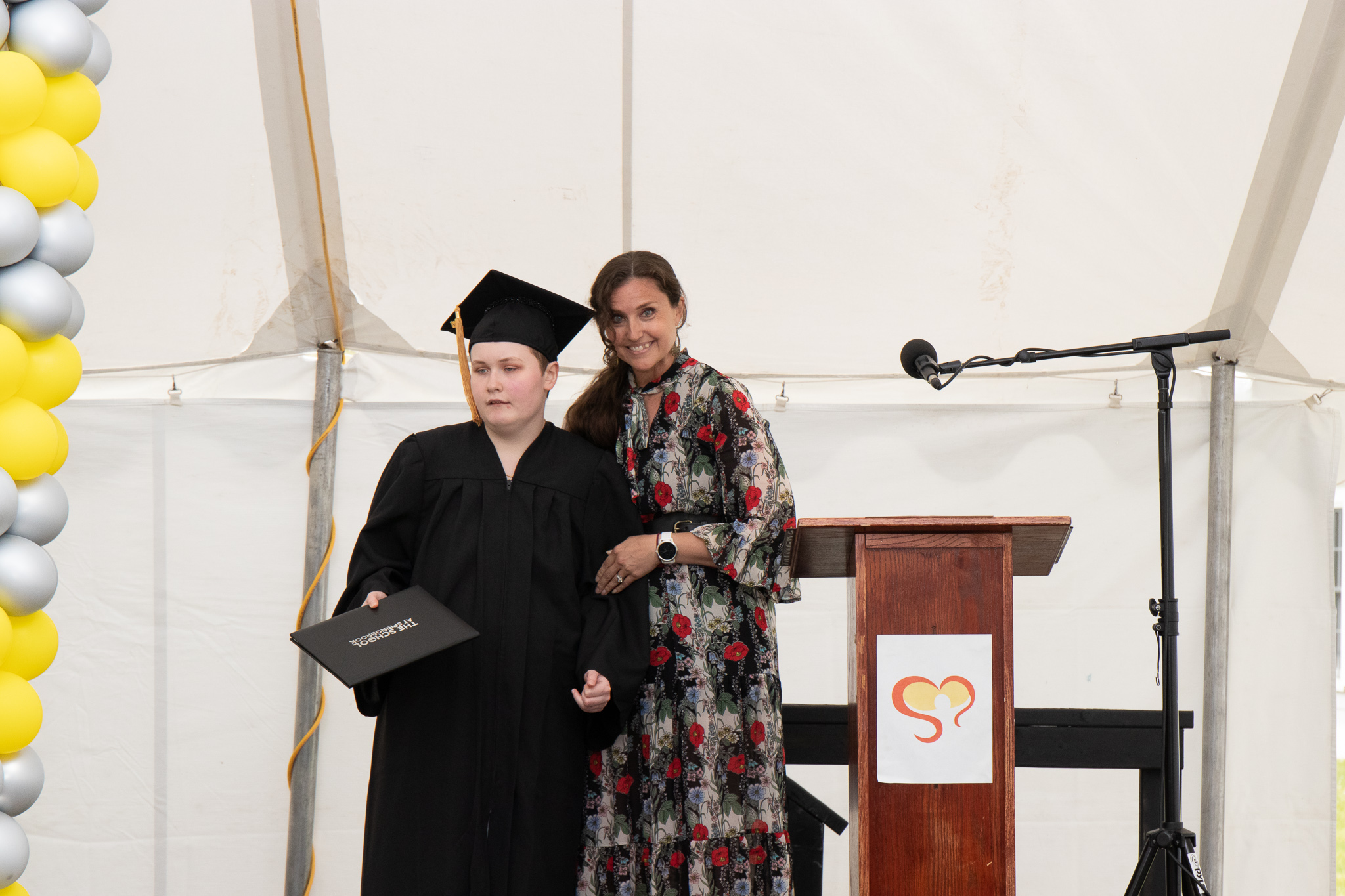 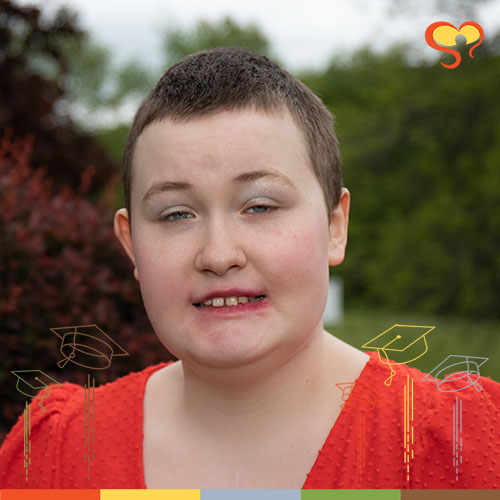 Alex has a talent for music and a flair for drawing portraits. Over the course of her time at The School at Springbrook, Alex has drawn portraits of her peers, family members, and staff. During her tenure at school, Alex has consistently worked on her social and conversational skills and frequently initiates conversations with staff and peers. As a way to develop her independent living skills, Alex has prepared shopping and grocery lists and enjoys planning meals for herself and others. After graduation, she is looking forward to being closer to her family when it comes time for her to move, as well as the opportunity to attend a day habilitation program where she can continue to develop her social and everyday living skills.

The School at Springbrook was pleased to present Alex with the Most Imaginative Award due to her knack for drawing and musical talent. Congratulations, Alex! 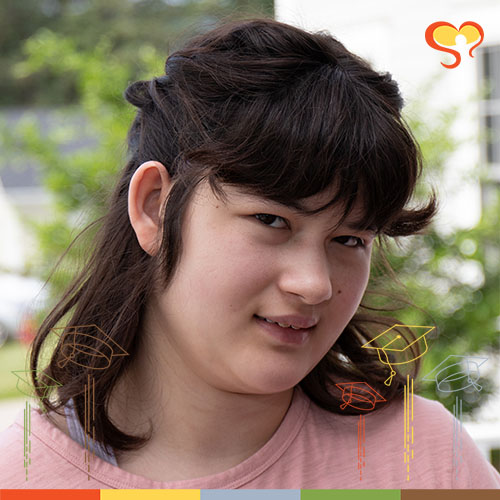 Sara has a vibrant and determined personality. Her talent for mastering puzzles has helped develop her independence and self-awareness. Often, to maintain her level of frustration or stress, Sara can be found working through all of the puzzles in a room and can build a puzzle from any direction. In addition to her mastery of puzzle-building, Sara is a talented swimmer. It goes without saying that one of Sara’s favorite places at the school is the pool, where she is a frequent cause of distress to staff due to her amazing ability to maintain her breath underwater for an alarming length of time! Sara has worked at school and at home to develop the skills that she needs to successfully move to a home of her own, which has included various housekeeping skills, such as cleaning, doing laundry, and washing dishes. After graduation, Sara hopes to find a position in housekeeping, where she can utilize these skills daily.

In recognition of her seemingly endless well of vitality, The School at Springbrook was proud to present Sara with the Most Energetic award. Congratulations Sara! 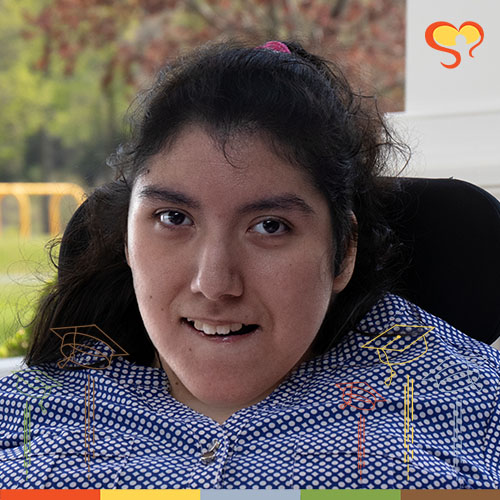 No one can turn a bad day into a great day like Rosa can! Her teachers will remember Rosa’s beautiful and fun-loving spirit for years to come. During her time at The School at Springbrook, Rosa has become more confident and outgoing and has worked hard to develop her communication skills. Using devices such as proximity switches, Rosa has excelled at learning different ways of communicating. In her free time, Rosa enjoys listening to the Harry Potter series. She also enjoys listening to country music and songs by Ricky Martin. Outside of school, Rosa loves spending time with family and traveling. After graduating from The School at Springbrook Rosa plans on spending more time with family and possibly attending a day habilitation program where she will continue to work on her communication skills and meeting new people.

The School at Springbrook was proud to present Rosa with the award for Most Charming Smile. We wish Rosa all the best in her future experiences! 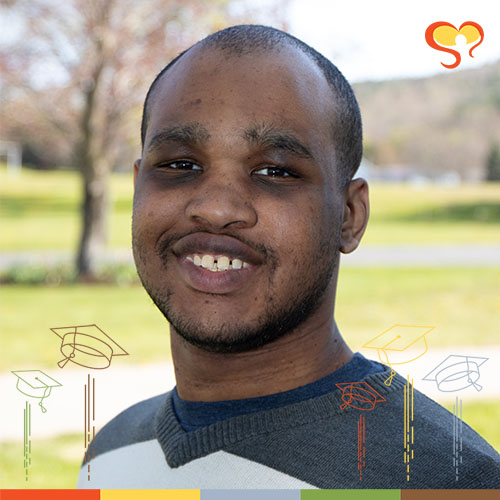 Joshua is energetic and outgoing. He is always willing to help his teachers and peers with whatever is going on in the classroom. During his time at the Golisano Center for Autism at The School at Springbrook, Joshua has made tremendous progress with vocational skills and following directions. In school, Joshua excels at navigating through the school independently. Each day, Joshua enjoys updating the lunch menu photos for the cafeteria. Outside of class, Joshua enjoys listening to music, playing games on his iPad, going for walks outside, and spending time with his family and friends. His favorite game is Temple Run, and he can outplay anyone who challenges him. After graduating, Joshua is looking forward to living in a Springbrook Community Home closer to his brother, who is currently a resident in a Springbrook Community Home. In addition, Joshua is excited to attend the Capstone Day Habilitation program where he will continue to work on vocational skills and become more independent.

Most days Joshua has a smile on his face and hums to his favorite songs, which puts everyone in a good mood. It is with this in mind that The School at Springbrook was proud to present Joshua with the award for Most Contagious Laugh. Congratulations, Joshua! 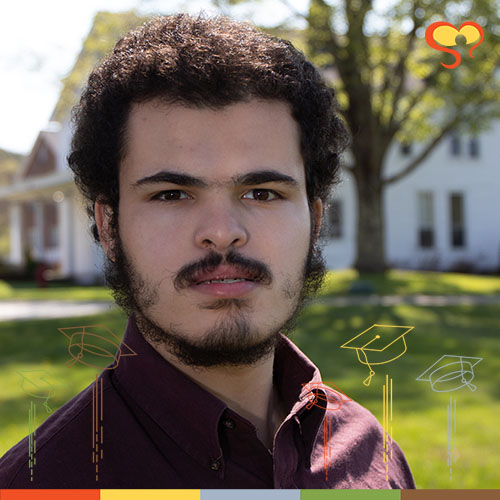 Active, upbeat, and clever are just a few of Anas’s characteristics. In his time at The School at Springbrook, Anas has excelled at accomplishing his daily tasks and goals and becoming a better listener. In school, he finds ways to complete tasks and accomplish goals in his own way. Anas enjoys listening to music while accomplishing his tasks and uses devices such as token boards and choice boards to get his work done. He likes engaging in music class and making his classmates and teachers laugh. Outside of the classroom, Anas enjoys listening to pop music, and going for walks outside. After graduating from the Golisano Center for Autism at The School at Springbrook, Anas is looking forward to working on skills that will help him become more independent and participate in all of his favorite things. With the skills and tools Anas has worked on at The School at Springbrook and his positivity and happiness, Anas will do great things! Congratulations Anas! 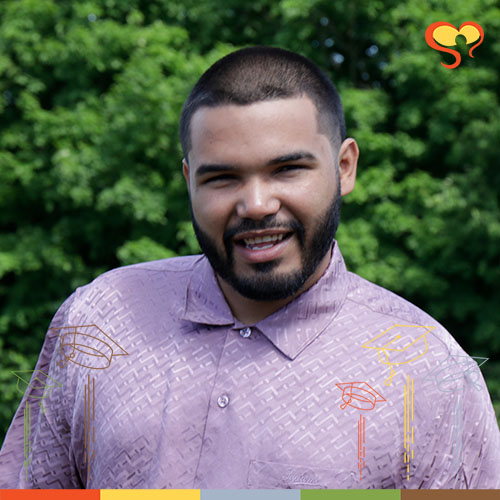 Since coming to The School at Springbrook, Hamsuel has increased his communication skills and participation in conversation and activities. Hamsuel has also excelled at learning to get attention for things he needs. Hamsuel is a bilingual student whose first language is Spanish. With the help of bilingual teachers and practice, Hamsuel has learned to communicate in both English and Spanish. Outside of class, he enjoys playing basketball, going for walks, participating in open gym, and spending time with his family and friends. Hamsuel is an athlete and, in his time at The School at Springbrook, he has learned how to play basketball and soccer as a member of the Special Olympics program. He loves participating in the Special Olympics and enjoys celebrating and receiving medals and ribbons. After graduating from the Golisano Center for Autism at The School at Springbrook, Hamsuel wants to spend a lot of time with his family and intends to keep active. He hopes to attend a day habilitation program where he will continue to work on skills and become more independent.

The School at Springbrook was proud to present Hamsuel with the award for Most Talkative. Congratulations, Hamsuel, on a job well done! 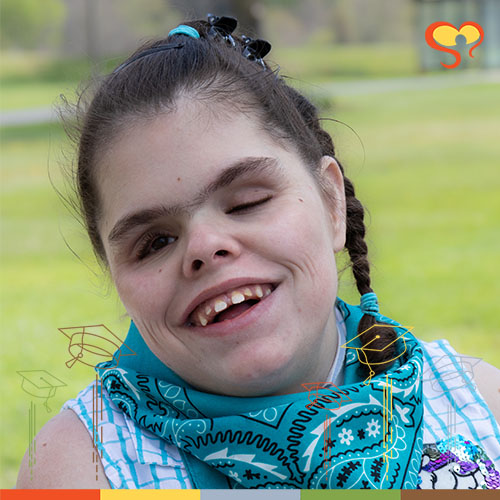 Sammy has a love for music and math, and she has been able to cultivate her talents for both while attending The School at Springbrook. While attending music class, Sammy learned to play the drums, which she will often play along to her favorite musical tunes, including some of her favorite Christmas songs. Music has become a way for Sammy to show off her personality and strengths and to overcome some of the medical constraints that have kept her from doing other things. Sammy loves to shop and is one of the best-dressed students at the school. She enjoys going out into the community with her aunt and nurse for shopping trips. Sammy’s favorite holiday has always been Christmas and she loves to spend the month of December helping decorate the school and her family home for the holiday. Her grandmother’s house has become one of Sammy’s favorite places, where her grandmother keeps the house decorated year-round. Sammy always looks forward to baking cookies with her grandmother. After graduation, we know she will continue to bake cookies and play the drums!

Because of her impeccable sartorial sense, The School at Springbrook was proud to present Sammy with the award for “Most Fashionable”. Congratulations, Sammy! 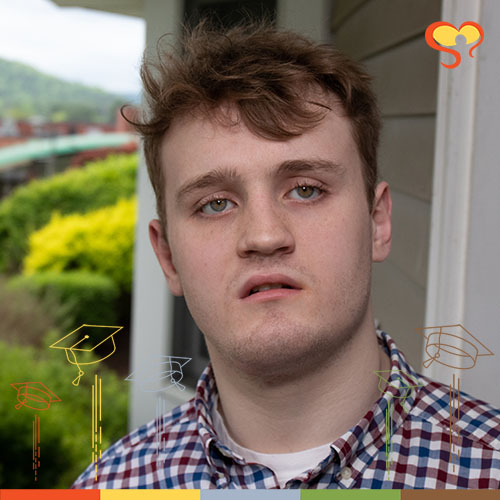 John, also known by his middle name, Blake, is always full of energy and willing to do whatever is asked of him. His contagious smile and laugh can brighten anyone’s day. Blake is a persistent young man with a passion for doing whatever it takes to accomplish his goals. Over his years at The School at Springbrook, Blake has excelled at vocational, office, and household skills and tasks. Blake’s biggest accomplishment was gaining the ability to utilize his coping skills when he is upset. In Blake’s free time, he enjoys watching Disney movies on his iPad, hanging out with staff and friends, and lounging in his room. Blake enjoys going for walks and listening to his favorite audiobooks, Lentil and Giraffe Can’t Dance, when he is not watching movies or relaxing. We are so proud of his achievements and are excited to see what he accomplishes after graduation!

The School at Springbrook was proud to present Blake with the award for “Most Unique”. Congratulations, Blake, on a job well done! 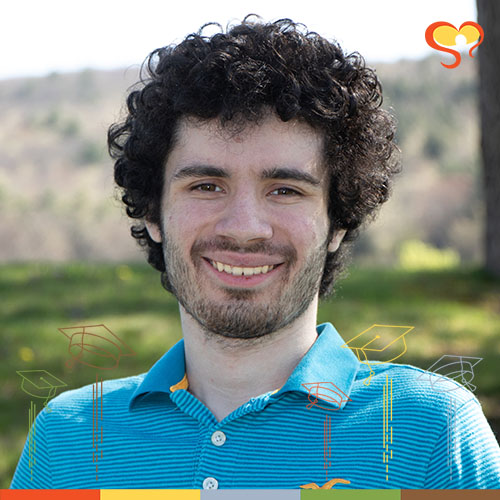 Our last, but certainly not least, graduate from the #ClassOf2022; is Edmund “Eddie” VanDright. Eddie is a winner of the 2022 State of New York Office of the Attorney General Triple “C” Award. This award is given to a student in recognition of their courage, which will assist them in meeting the challenges ahead; their remarkable commitment to bettering themselves, their school, and their community, which makes them a role model to others.

Edmund is a very creative young man who loves to draw and who has brought many of his inventions to life in the classroom at The School at Springbrook. Eddie has created a marble run out of recycled and reusable materials, while his ingenuity led him to develop a game show that could be played by his classmates. Eddie hopes to share his talents for drawing with the world as a cartoonist. Eddie has worked hard to develop his independence by working on key social and daily living skills and has excelled at evolving his social interactions from one-to-one with peers to participating in group activities. After graduation, Eddie looks forward to being closer to his family home, while having the opportunity to attend a day habilitation program where he will continue to develop his strengths, as well as the chance to work at a local grocer.

In addition to his Triple “C” Award, The School at Springbrook was proud to present Eddie with the award for “Most Musically Gifted”. Eddie’s creative exploits will be missed; however, we wish him the best of luck in his future creative endeavors!