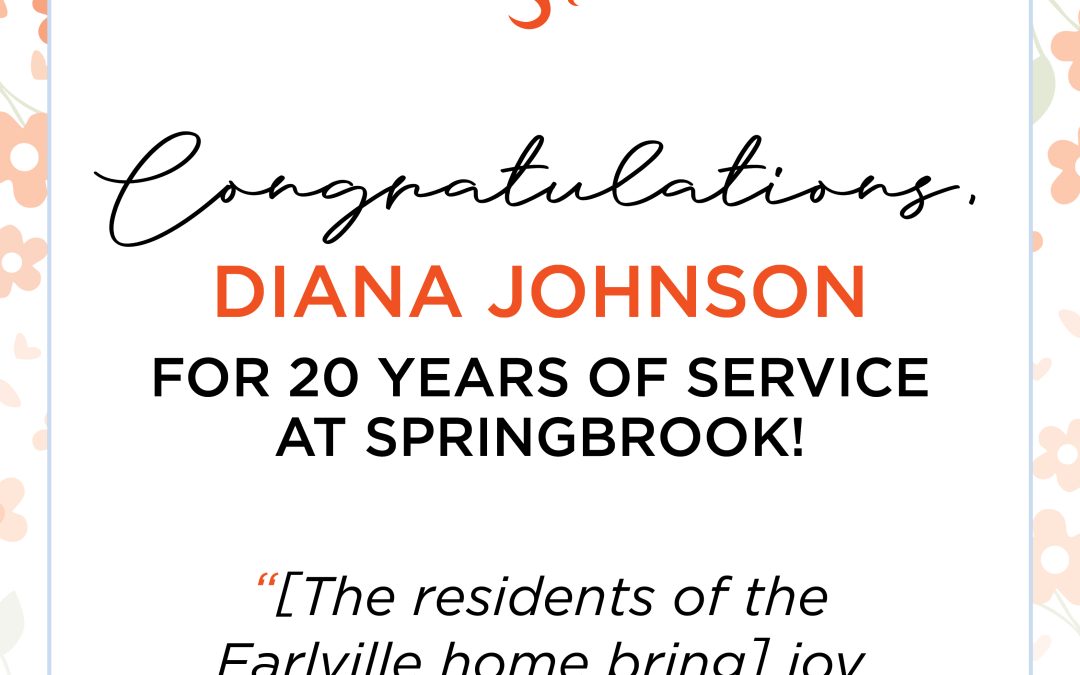 Before working for Springbrook, Diana worked in an Ames department store but got to know two of the people for whom the home in Earlville was built because her daughter was going to school with them. She was then prompted by her brother Dean, who formerly worked at the house, to take a position at the home because they were looking for more staff. After 20 years, Diana continues to enjoy her work. COVID-19 has complicated the past few summers for the residents of the community home, who would go on camping trips to Old Forge every summer and sometimes three times over the summer. The residents and staff enjoy camping and being away from the house because it allows them to sleep in and not worry about scheduled programs or medical visits. This summer looks promising! Diana has been encouraging short trips for everyone at the house to get them back out and doing what they love.

Outside of her work, Diana spends much of her time with her daughter, who is now in her 30s. Much of their time is spent planning trips together or spending their time outside. They are looking forward to taking their second trip to The Walt Disney World Resort in Florida this summer. After their first trip, Diana says that they have learned to plan to make the most of their time at the resort and have a two-week trip planned. A few of their favorite shows at the park included live performances of The Lion King and Frozen. They also had breakfast with Mickey, her daughters’ favorite character. Diana hopes that on this second trip she can check out her favorite parts of the park: Animal Kingdom and the Circle of Life Tree. Outside of traveling to Disney World or Tennessee, another favorite destination, Diana loves to take picnics with her daughter or take long drives through New York state.

Diana has traveled a lot within New York, despite admitting that she “just works,” and doesn’t always have time for leisure activities like reading or watching TV. Frequently, her daughter will join her on these short trips through the state. On these trips, they visit the Adirondacks and the towns bordering the Canadian border, like those in the Thousand Islands region. But don’t expect Diana to want to cross the border if it involves a bridge. On a family trip to Niagara Falls, Diana left everyone on the other side as she ran across on foot to ensure she would make it! Despite all of the metaphorical bridges that Diana has seen built or those she has crossed in 25 years, we are happy to have her continued energy and support at Springbrook.